The Cyber Scene in Stockholm ~ by Karl Palmas

The past week's events have all been somewhat overshadowed by the
battle of the giants just about to commence. No, I am not talking
about the Olympic games. Rather, I am referring to the allocation of
licenses to operate third-generation mobile telephony (3g). However,
the word 'telephony' is slightly misused in this instance: The
matter to be settled by Swedish authorities is which operators will
be permitted to provide mobile Internet services on the prestigious
Swedish market.

The deadline for application for the sought-after licenses was last
Friday (September 1), 3p.m. By then, representatives from the 10
candidate consortia -- including Swedish incumbents Telia and
international competitors Sonera, T-Mobile International (Deutsche
Telecom) and Orange -- gathered outside the Post &
Telecommunications Agency in Stockholm to hand in their paperwork.
Some skeptics scorned the technologically adept applicants for not
submitting their bids by e-mail. Nevertheless, bearing media
attention in mind, the industry opted for party publicity, rather
than electronic efficiency.

As always, Swedish Internet access agitator and media magnet Jonas
Birgersson, CEO of Bredbandsbolaget, stole the show. He showed up at
the gathering in an impeccably shiny 1935 Volvo, wearing his
trademark fleece sweater, of course. He was followed by a WW2, full-
sized truck loaded with a box containing his consortium's
application. Birgersson's competitors, it seems, are now getting
more and more intimidated by his antics. "There ARE other players on
the market, you know," one antagonist sourly commented.

Another hot contender for the coveted 'IT-guru du jour' title is
Alexander Bard. Mostly known as a pop icon in bands such as Army of
Lovers, he is currently focusing his efforts on new media ventures
and analyzing the societal implications of the Internet. In line
with this, he is co-authoring a book about 'netocracy': A societal
model where Internet proficient 'netocrats' will constitute a new
ruling class. The focus on The New Sociology, rather than The New
Economy, has attracted a new set of people to the cyber scene: At
the release party on Thursday, August 31, the Internet entrepreneurs
of Stockholm were coupled with various black-clad social critics,
ordinarily moderately interested in Internet issues.

A more traditional blend of people attended the Cypoint launch
party: 400 members of the Internet/New media and Venture Capital
community turned out to celebrate the merger of WebTeknik, E-Zone
and Bobby United into one solid unit. In the process, the partygoers
got to see stand-up comedian Fredrik Lindstrom and R&B queen Titiyo
perform. The venue was the hangout of choice for many a new media
entrepreneur - Grodan Sergel, on the bottom floor of the so-called
High-Tech building, home of several Stockholm dotcoms.

Generally, the past week's Stockholm scene was characterized by a
certain friskiness, possibly fueled by recent reports resurrecting
the concept of Internet retailing. That same mindset was very much
present at the Cypoint party. Thus, when local techno heroes
Antiloop stepped to the turntables, the crowd allowed itself to
assertively enter the dance floor and what will, no doubt, prove to
be a promising fall... 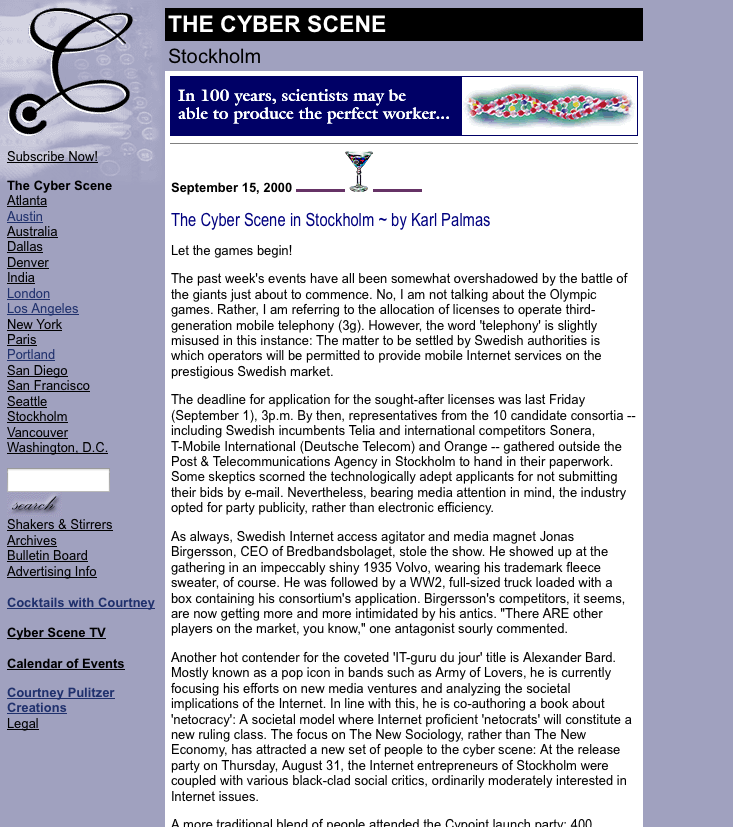