It was a classic temperate Spring evening on Wednesday, April 25th for the “Cocktails with Courtney” ~ Paris debut. And, classically for this part of the world, the sun was still out when people began arriving at the Flute Bar and Lounge near the Arch de Triompe. As I prepared the room and ordered some pink champagne for guests, several had already arrived: Erzsi Deak, a writer, literary scout & editorial consultant whom I met through Josh Freeman (Director of Interactive Services at Columbia University) and her friends author & illustrator Jeanne de Sainte Marie and Sarah Towle (Time Traveler Tours).

Upstairs in the open lounge (with a large space for the chandelier) was Rozenn Milin who is the director of Sorosoro, an affiliate of the Chirac Foundation, which works to preserve disappearing languages by filming and recording remaining speakers around the world and her friend Aline Rutily.

Next to arrive was the dashing Francois Mouclier (Canal-Luxe.org VP) and his lovely wife Catherine Le Yaouanc who is the GM of the Franco-British Chamber of Commerce & Industry. Francois has a history of being in the fashion world—his father is Jacques Mouclier who was President of Chambre Syndical D'Haute Couture. Catherine is apparently the only woman head of a Chamber of Commerce at this level making this power couple gracious and engaging as we began introducing ourselves.

My cousin (and photographer) Hillary Goidell popped in looking as lithe as ever (she also had a baby shortly after I did) and we spoke with attorney Stanley Gehy (who also has a recycling business in Haiti) about children’s bi-lingual language acquisition.

The dynamic Nathalie Ohana (OMGmother.com) arrived with a great gaggle of good-looking geeks—all entrepreneurs who are working in the web and developing cool sites. These were: Margaux Derhy (La Petit Etoile.net) who writes business plans and business development for companies and Hélène Duthilleul and Karine Sabolovic (MadamePopandKids.com) which transforms your child’s drawings into real art (on a canvas, a pillow and more! Nathalie facilitated many introductions, easy for her as her whole business is about creating a network—that is a trusted network of friends for your child. These trusted friends become OMGparents...so your child can have more than just one set of God-parents. They can have “OMGParents” for all those “oh my God” moments in your child’s life!

Then the dudes arrived with their classic French casual charm-- Raphael Vannier and Ygal Sananes of (seventyone-percent.com) who’ve created a line of super slick sunscreen for surfers after seeing a gap in the market for this demographic. Emmanuel Cassimatis could be considered a “vrai” serial entrepreneur already—he’s founded Goodwizz, a global social meeting network that helps people go beyond that first contact and previously co-founded an energy company, EGG-energy and founded an NGO Paper for All. And Mr. Urban Linker himself, that's Jonathan Azoulay, stopped by--he's the one to know if you want to recruit someone in Information Technology.

I had a chance to chat with Philip Yook, a lawyer who’s spending some time traveling and enjoying what life has to offer around the world and Karen Hunt, who just started with Kobojo which creates social games for Facebook or iPhone (and just raised $7.7 million).

Flutes of pink champagne were sipped, tea sandwiches were nibbled on as this nice mix of young entrepreneurs, artists and business-minded creators had a chance to meet each other in this first intimate, convivial and special “Cocktails with Courtney.” Sponsored by Recursion Ventures, which develops solutions for the world’s most critical systems, making them more secure and valuable as a result, I can say the buzz from this first event will build. I can feel it. And this month (May 25th) we’re smack dab in the middle of the eG8 forum. Stay tuned for some titillating exposure of the Parisian Cyber Scene!
at 2:51 PM 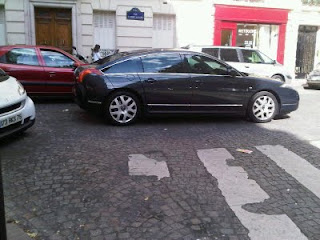 Nice parking job, dude! He's in the middle of two streets!! (Red car was passing in the street as I snapped the photo.)
at 10:38 AM 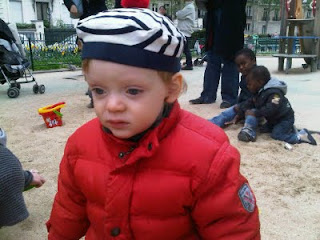 My baby boy - he loves colorful socks and he chose this hat to wear today. He's a stylish one!
at 10:33 AM

It was in the high 70s over the weekend but now it's apparently going down to the 20s for the rest of the week. A Spring in Paris!

Meanwhile, I'm hearing how the startup technology scene is exploding in New York City. And at the same time I'm seeing how much is bubbling up here in Paris as well. Events and recaps coming soon!
at 7:54 AM

I Saw The Light.

Today in church the sermon was about the man born blind to whom Jesus gave sight. It was after Jesus rubbed mud in his eyes and then told him to go was in a special sea. (see?) Throughout the sermon, I kept hearing the song "I Saw The Light" by my favorite singer, Hank Williams. Amen!
at 7:50 AM

Standing in line at the Monoprix. The price is 6.80. I put down a 10 euro bill and begin counting out my .80 centimes. This isn't what the cashier wants, however, and takes my ten, gives me change and refuses my .80 centimes. &*(^%$! What the heck. I can't begin to explain how upsetting it is to deal with. If you want to give a cashier change, start with the coins and THEN put the bill down. I've done it in the past. Should've learned from my lesson.
at 5:14 PM