Cocktails with Courtney ~ May


It has been the coldest and rainiest Spring in Paris in forty years, according to some reports. And May 30th, 2013 in Paris was another typical rainy and chilly day. Of course it was tres chaleureux (very warm) and friendly in the Tuileries Bar at the Westin Hotel for this month's cocktails.

Guenael Amieux, a long-time web producer, and I chatted for a long time about the "cyber scene" in Paris and how it's picking up; Loic Le Muer and how he seems to be considered the leading web guru around; how Google Glass is a little prejudice since glasses-wearing folks can't really test them out (unless you're wearing contacts I guess); and why is it that even to this day our phones and computers can't handle two languages at once? He cited that there's a huge population in the world that's bilingual and how, for instance, if I text my husband in Franglais (French + English), the phone will consider one of the languages to just contain a row of misspelled words.

Jeanne De Sainte Marie, who came to the 1st Cocktails with Courtney in Paris (April 2011), was happy to show us her completed app after two years of intensive work. As an illustrator, she drew extensive drawings and paintings for a charming French/English bilingual app for children. A Word's A Bird (Spring Flies By In Rhymes) is a beautifully illustrated interactive poetry app where you can read, listen and play with the poems. Her illustrations are gorgeous and the team who worked together on this are talented professionals. (MORE INFO)

My good friend Victor Le Broussois came by, looking refreshingly springy in white jeans and crisp navy blazer. We've known each other since his early dot-com business (StockOnWeb) and our joint Cocktails with Courtney event in Cannes (2000). Victor has traded in the 1s and 0s for paints and brushes and will be showing his paintings and installation at XPO Gallery, a gallery well known for its affiliation with art at a digital age. Currently Aram Barthol is showing. His show is open only by appointment and Victor's vernissage (opening cocktail) is by invitation. (If you'd like an invite, let me know.) We'll be sure to have a report on it!

The guests tonight had a chance to win a limited-edition Cocktails with Courtney t-shirt and the lucky winner was Charlotte Panis, who runs a private concierge service for people in Paris. I met Charlotte at an ISG Digital "First Monday" event and she explained in more detail how she helps travelers to Paris experience new, cozy and special restaurants, shopping and touring. Whether a seasoned traveler to Paris or coming for the first time but craving something unique, her services help the visitor see a nouveau Paris.

With such a great repartee between all the guests, I'm sure the next Cocktails' will draw out more interesting folks. 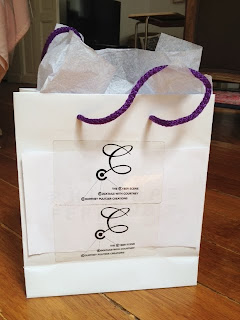 Well I may not be the best product photographer, But we have our gift bag ready for the lucky T-shirt winner for tonight's Cocktails with Courtney!
at 9:20 AM

Invite: Cocktails with Courtney - May

It's been cold and rainy since Winter "stopped." People have been complaining of a terrible Spring. It's definitely an indicator of Global Warming--and freezing. In either case, it's always sunny in a Cocktails with Courtney event! Our next one is May 30th so sign up and come enjoy a convivial evening with like-minded people.
at 12:35 PM

I think it's time.

I've been painfully aware of the lack of posts to my dear Cyber Scene. I have at least four Cocktails with Courtney events to write-up. I think it's time for me to admit--I will get these posts written, but in the meantime, I've decided to break the barrier and put my personal life experiences here in France amidst my tech writings. I hope you'll find them as amusing as I do! ;) A tout a l'heure!
at 6:42 AM