My friend Yann Emilian introduced the folks at Mastercard to me and thus, an invite to their "Priceless Women" luncheon on Wednesday, June 5th on the occasion of the French Open at Roland Garros was extended to me.

This friendly and informal setting, with the upper crust tennis world as our backdrop, was a great occasion to share experiences of women having a remarkable professional course and coming from different viewpoints.

After some brief networking with refreshments, Monica Biagiotti, Head of Marketing MasterCard Europe, opened up with their interest in organizing this luncheon because of a change in Mastercard. "Mastercard is in the world of change, it's not just a credit card anymore" and they want to be a network for people to connect. They want to be able to offer their clients a micro network. They created a network of women (EWLN – European Women Leadership Network) and, benefiting from their "Priceless" campaign, saw an opportunity with the French Open.

The first year as a partner in the French Open, their "Priceless" cities campaign was the perfect theme -- starting right in the very "Priceless" village of shops at Roland Garros. With the re-hiring of Joyce King Thomas at McAnn agency, they thought of women who changed the world, and about things we couldn't buy before and how credit cards have changed that. That's "Priceless" for them.

Going around the room each woman then introduced herself and I reflected on one of the advertisements, "Vivez a (Paris) des moments qui n'ont pas de prix." ("Enjoy (Paris) moments that are priceless..") www.priceless.com/paris

We had the pleasure of having former professional tour tennis player, Nathalie Dechy, with us. This three times doubles Grand Slam champion and the only female member of the Roland Garros Executive Committee shared on her professional experience. She explained how for her Sport is a metaphor for Business and how she tries to treat it in the same manner.

We were then led into a round table discussion on different and similar qualities of female and male leaders and how organizations with more women at the top levels function better. Marina Catena (World Food Program), who was an Italian parachutist in the military, spoke about how being a woman in the military has changed certain protocol. In her current role she discussed the idea of using "digital money" with Mastercard to help people.

There was a little discussion around the idea of the glass ceiling and women who come back to work after a certain age. The question was posed, "at what price" in response to the idea of many women who come back to work after being at home and raising children. They are not willing to put in long hours with no break like they did before. Actress Vahina Giocante (who brought her son Nino), put forth that men today also don't know the roles they should take on because changes with women in the workplace, and world, affect them too.

Throughout this buffet of topics, we were able to sample an appetizing lunch of tasty morsels passed on large plates. Monica finished off the luncheon with "networking is fundamental. Do it more. Do it here." With that, we got up, and networked.

Afterwards we had the pleasure to attend the matches of the day, of which I thoroughly enjoyed Maria Sharapova and Rafael Nada! 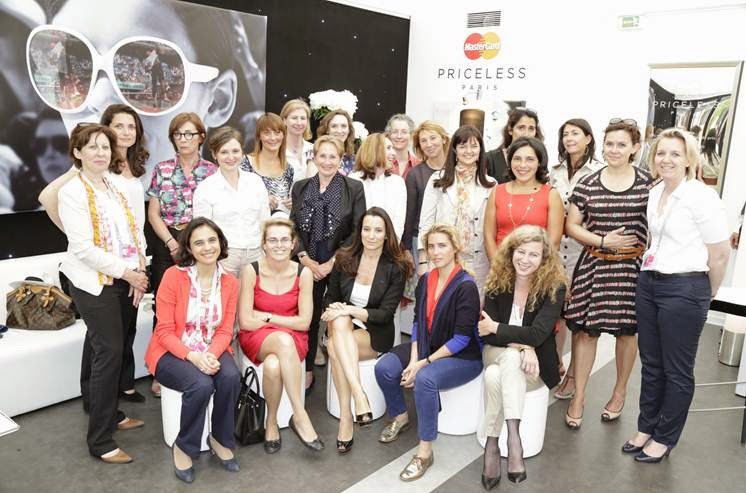 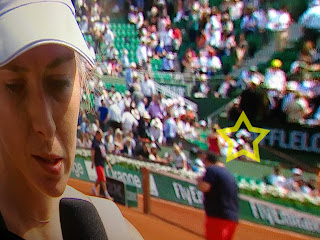