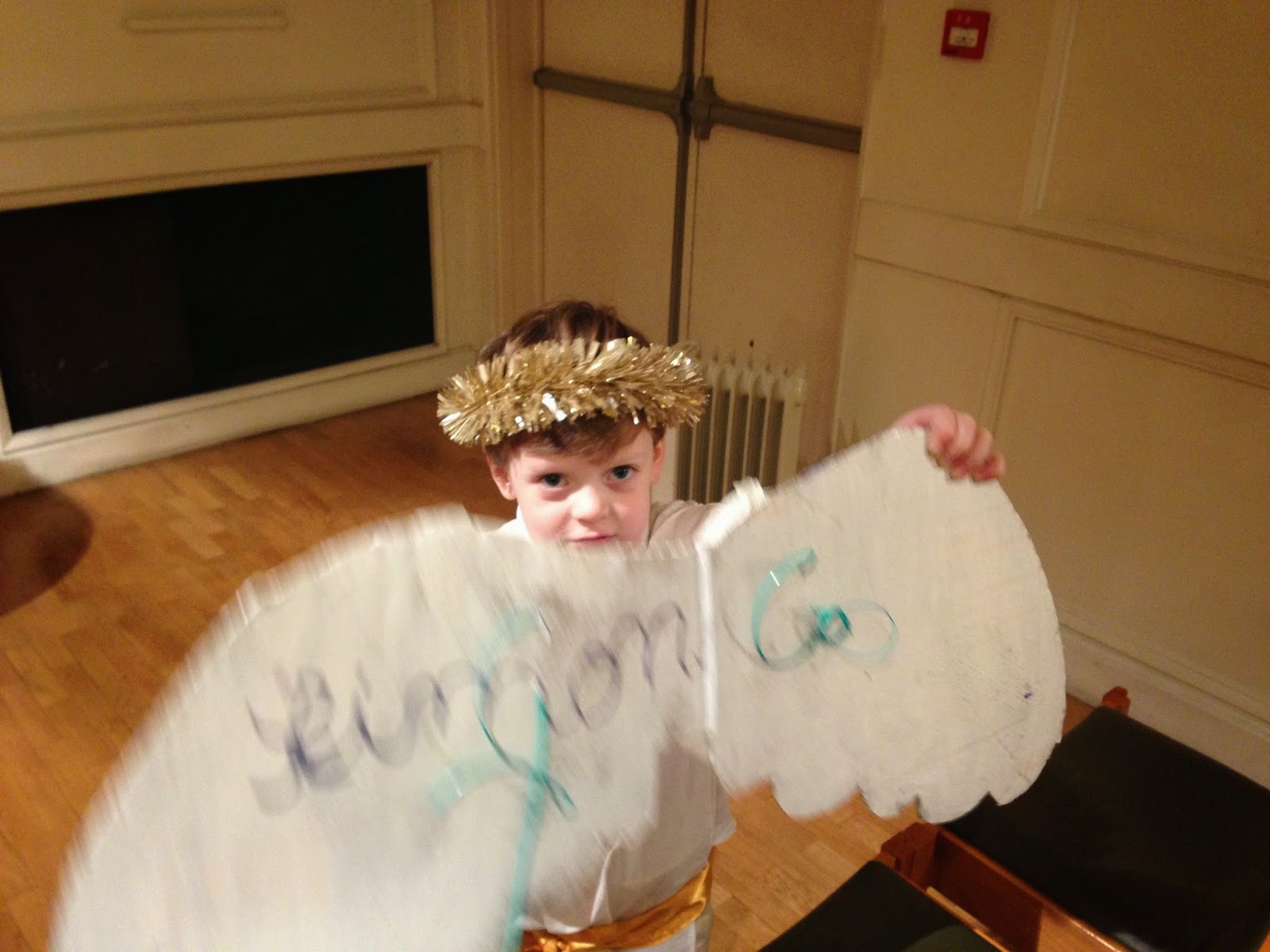 This was a busy weekend with S's nativity play rehearsal on Saturday at 10am and then the church service Sunday at 10h30. He didn't get to rest in much: usually we like to have very mellow and laid-back Saturday mornings for him.

I will say he did great in the little play. He really got into the role of being an angel and flapping his wings for the rehearsal when there were just two children. Sunday there were about 12 so it was harder to run around and "fly" like an angel. Plus he had a wardrobe malfunction and held his arm up straight to keep the wings "balanced." My little trooper. He's such an angel. Truly! 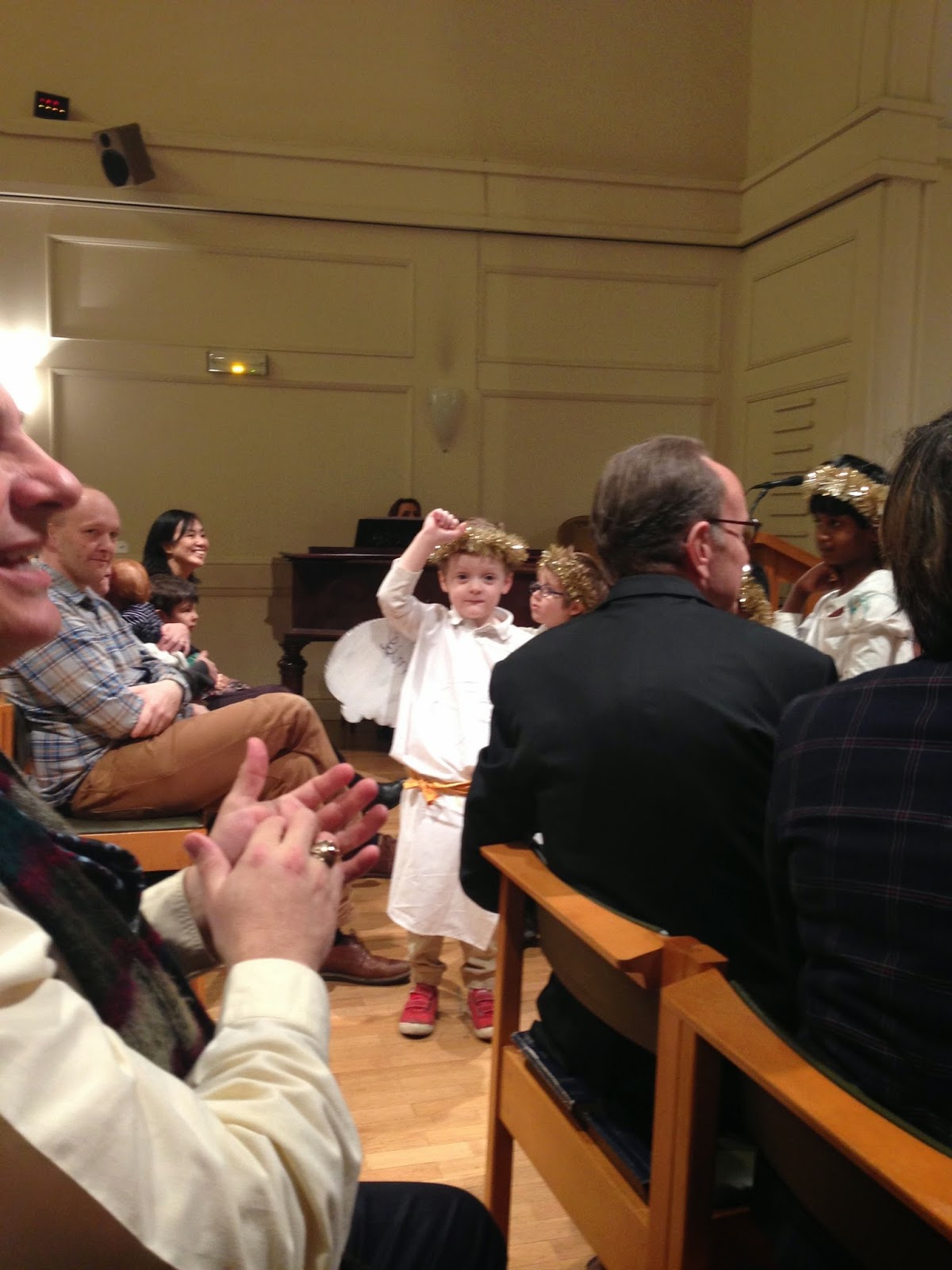 [ It reminds me of his first performance as a clown in his Petit Section end of the year show. The rubber elastic broke so his little hat wouldn't stay on his head. He was so sad and so distressed about it. He wanted to try and fix it, he concentrated on fixing it, but the show went on and he just faded further and further into the background looking more and more sad. IT WAS SO SAD! :( ]

This time he was a trooper though. But he still looked exhausted and bummed out that his wings didn't stay on. (stupid plastic cords!)

I did my best to get him home quickly after each event so he could rest for his big show on Monday too. 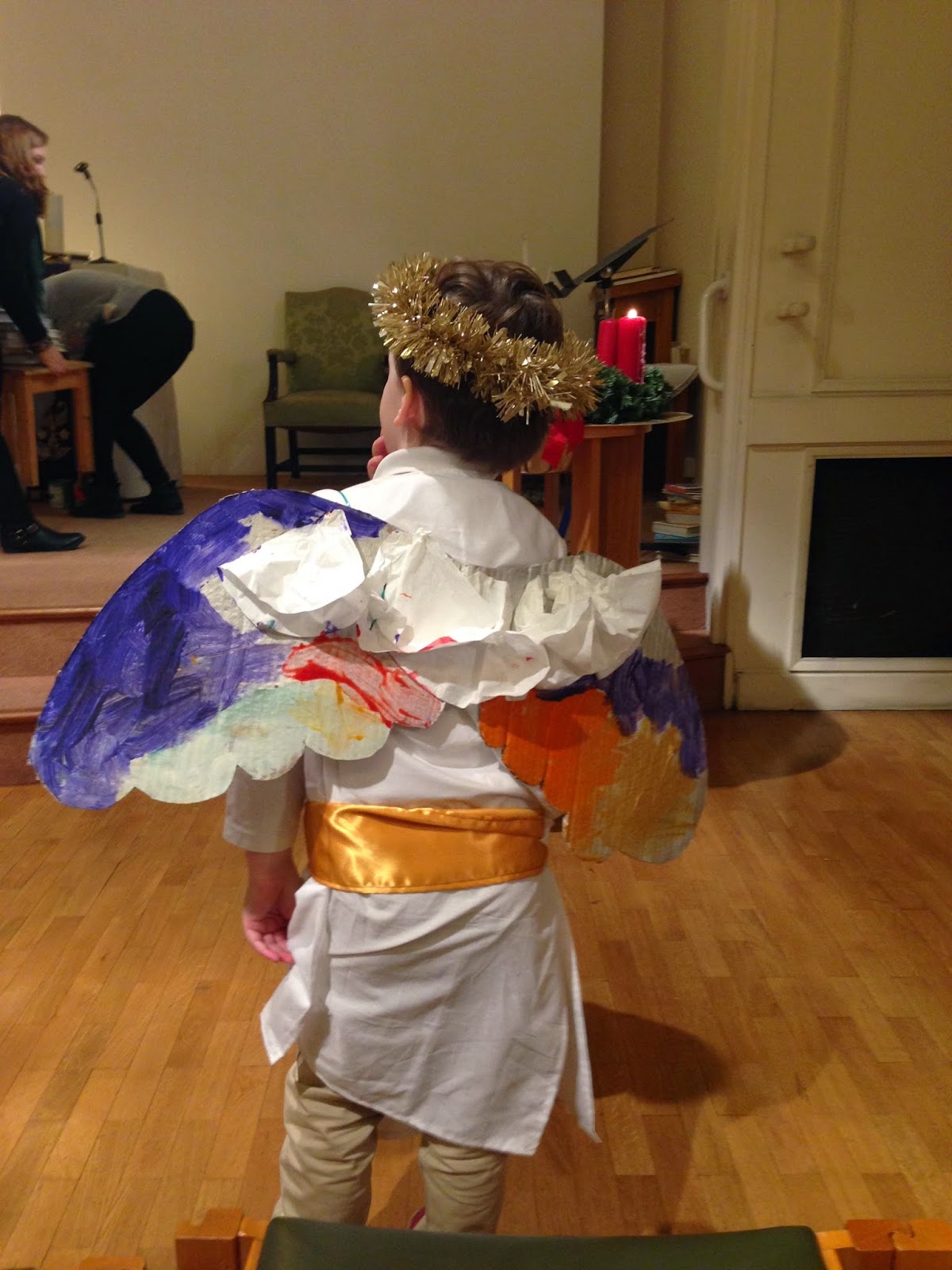 Monday night was Simon's class' chorale performance. I got him home and fed him two hot-dogs and pringles (I know: a model example for a meal). We got dressed in our fancy clothes and headed back out in the night towards school. He picked out his outfit himself. He wanted to wear his fancy suit pants and vest that his Grammy got him as part of his Easter outfit, a white shirt and his fancy silk red-and-white striped bow-tie. He doesn't have any dress shoes for the moment so he wore his patent black "Flash McQueen" sneakers. A sharp-lookin' little fellow if I may say so myself!

I forgot the performance was in his classroom and we went directly into the preau (hall) where two other smaller sections were performing their Christmas songs. The place was packed! Simon snuck in and sat down in front with his friends who had younger siblings performing in the show. 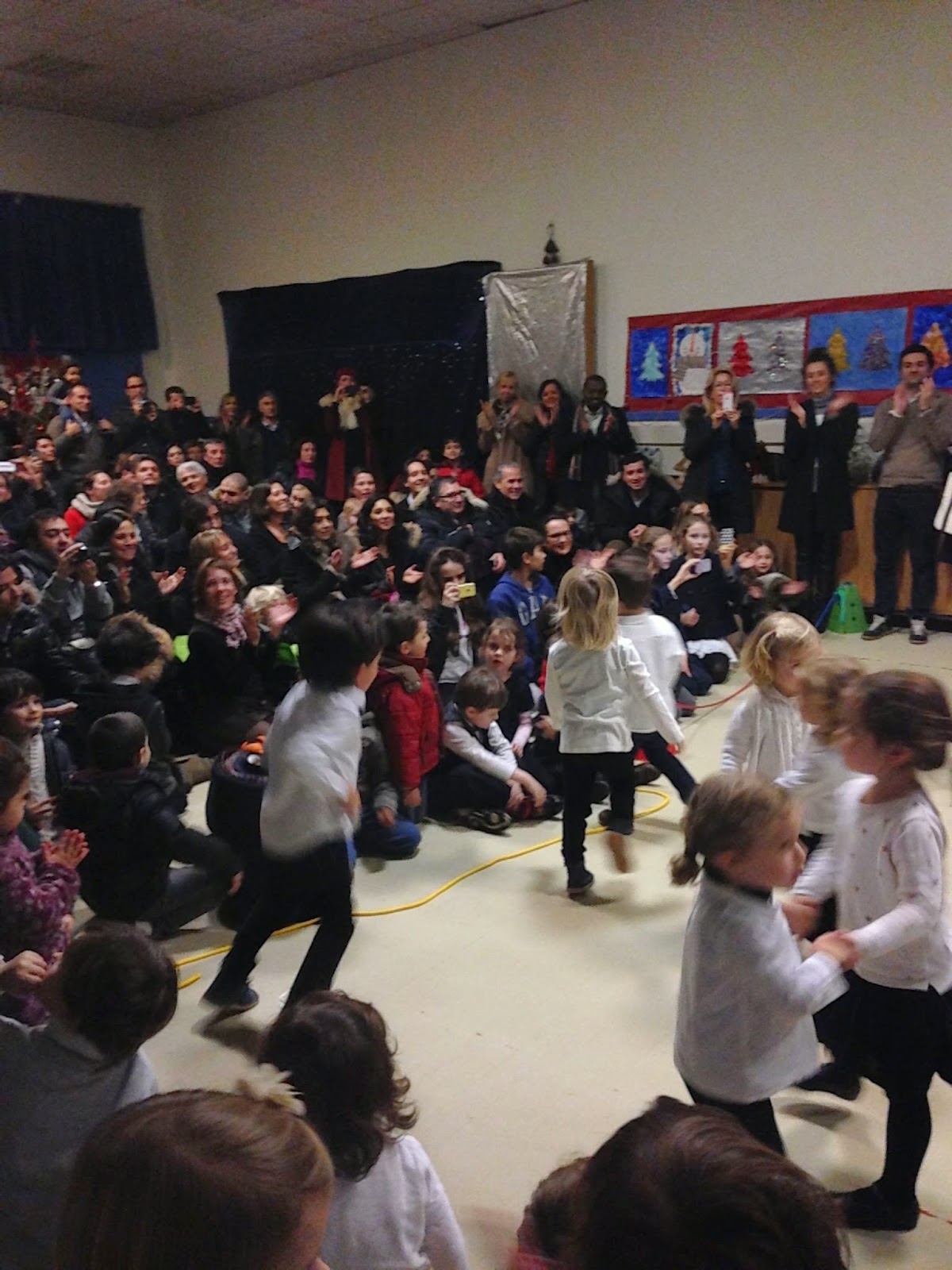 I looked around. How were they going to clear out these hundreds of parents and children in time for our show? Plus there were cookies and drinks spread out on tables. This was going to take a typical chaotic moment into a new stratosphere for me. I waited outside and got misty-eyed thinking about how beautiful this experience is. How I'm so lucky to be able to be this boy's mother. And sad that his Papa wasn't there too to share in it...

...and in the beauty of life in all it's tragedy and comedy...


...and looked in at Simon as his crush was petting his hair, his neck, his shoulders. Her parents must be really affectionate in front of her a lot. :)

I spied people streaming in from the outside, but going directly upstairs. I thought, "huh." And I figured maybe I should see maybe his class is meeting first up there before coming down. I got upstairs and everyone was in the classroom, all rearranged for the party and all the children already up on the benches about to perform.

YIKES! I completely forgot the whole evening was taking place in his classroom! Yikes yikes yikes! I told the teacher we were in the preau (hall) and would be right up. I ran downstairs jingling all the way.

I pushed passed the parents in the door and went up to Simon. My sweet little boy. Arranged his gloves together on top of his coat so they didn't get lost. I got his gloves, coat and back-pack and tapped him on the back. Simon! We have to go upstairs!

He got up and we raced together upstairs. I put him in the classroom as I hung up our coats. His uncle had already arrived and (despite my directions) went directly up to the class! I didn't want to sit all the way in the back with my brother-in-law (nothing personal!) because I wanted to get good pictures for my husband who was still working in the south of France and couldn't make it.

I squeezed myself between two mothers in the second row.

The concert began! Simon was AMAZING!!! He knew all the words, he enunciated very well, and he even had lots of hand gestures and moves that went along with the song, which only one other child did as well. (All the others kinda just stood there.)

My little boy. Such a perfect angel. Such a great little performer. Such a classy dresser. So sweet.

His uncle gave him a little present of a Playmobil Pirate and each child in the class got a paper Santa stocking with a toy. (He hasn't opened it yet but it appears to be a pretty candle in votive.)

What a festive weekend and start to our week! 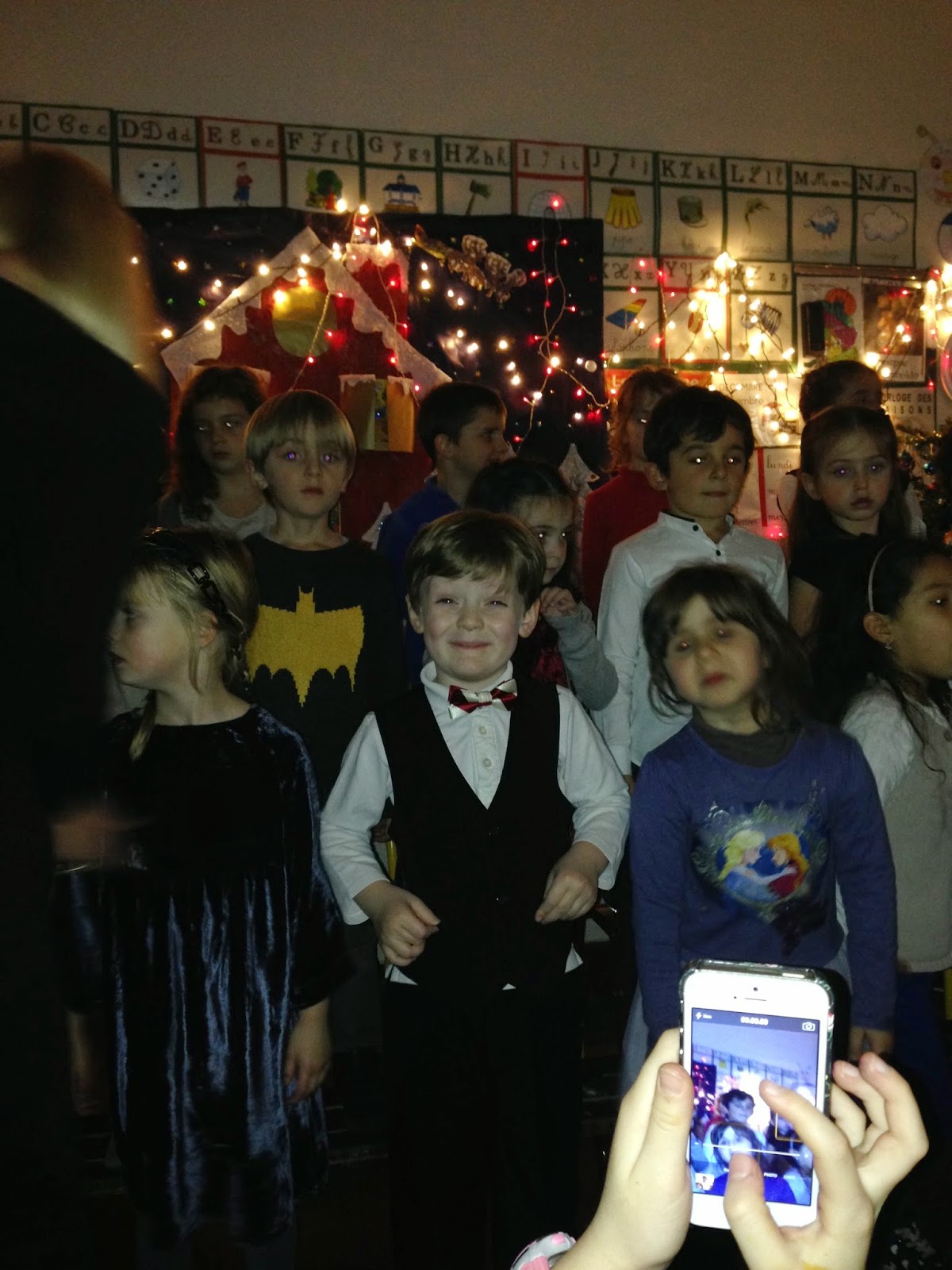 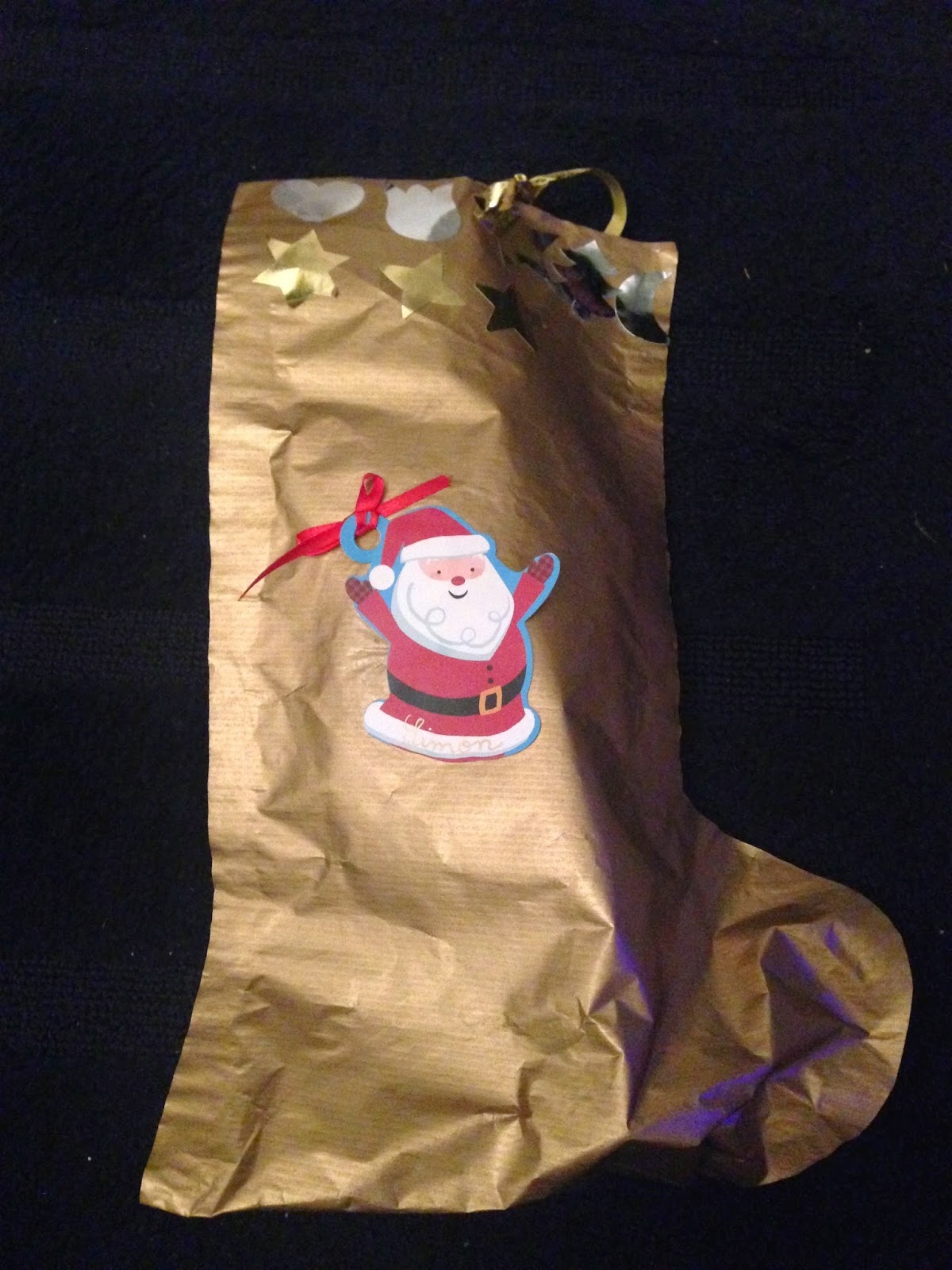 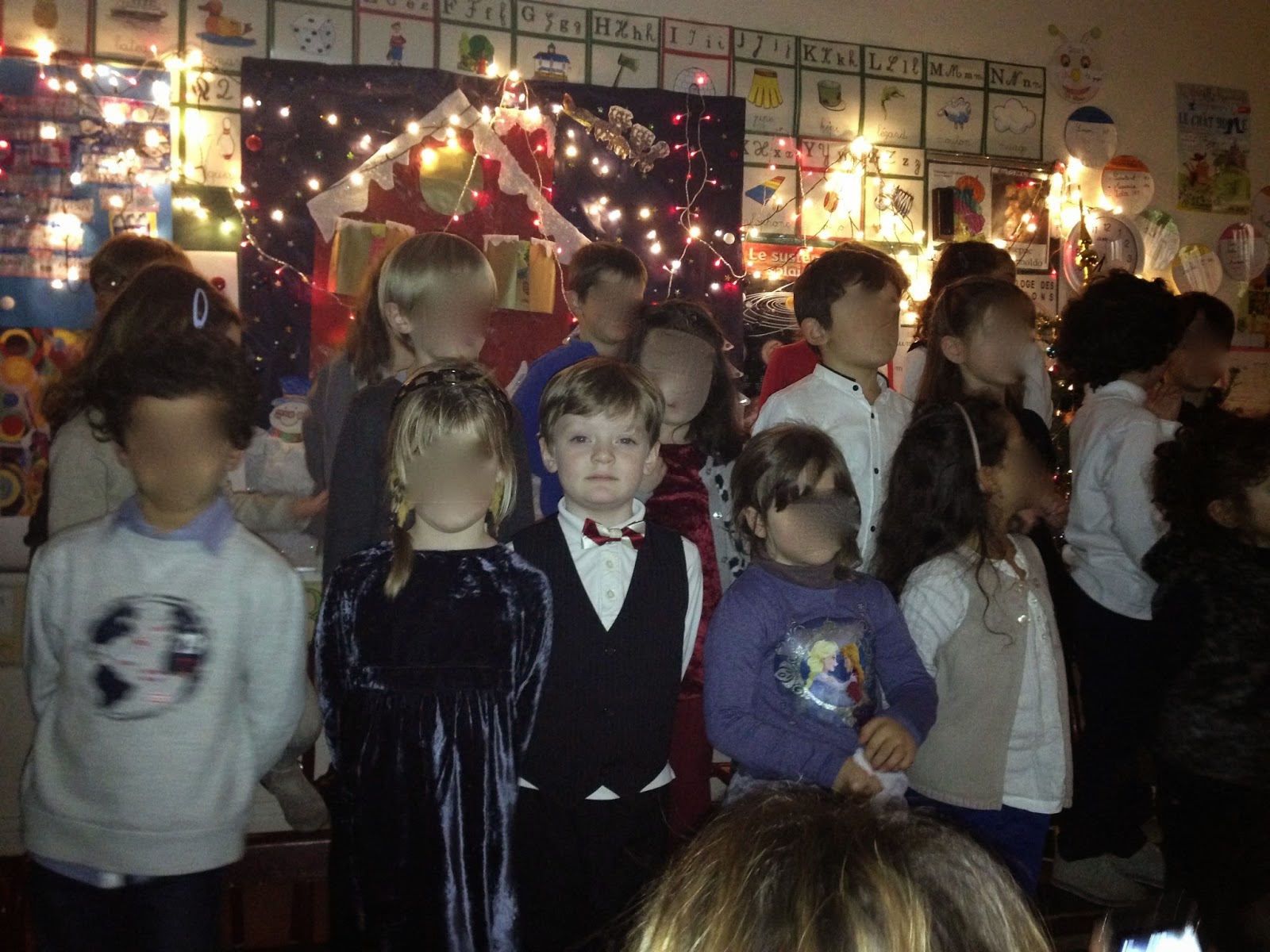 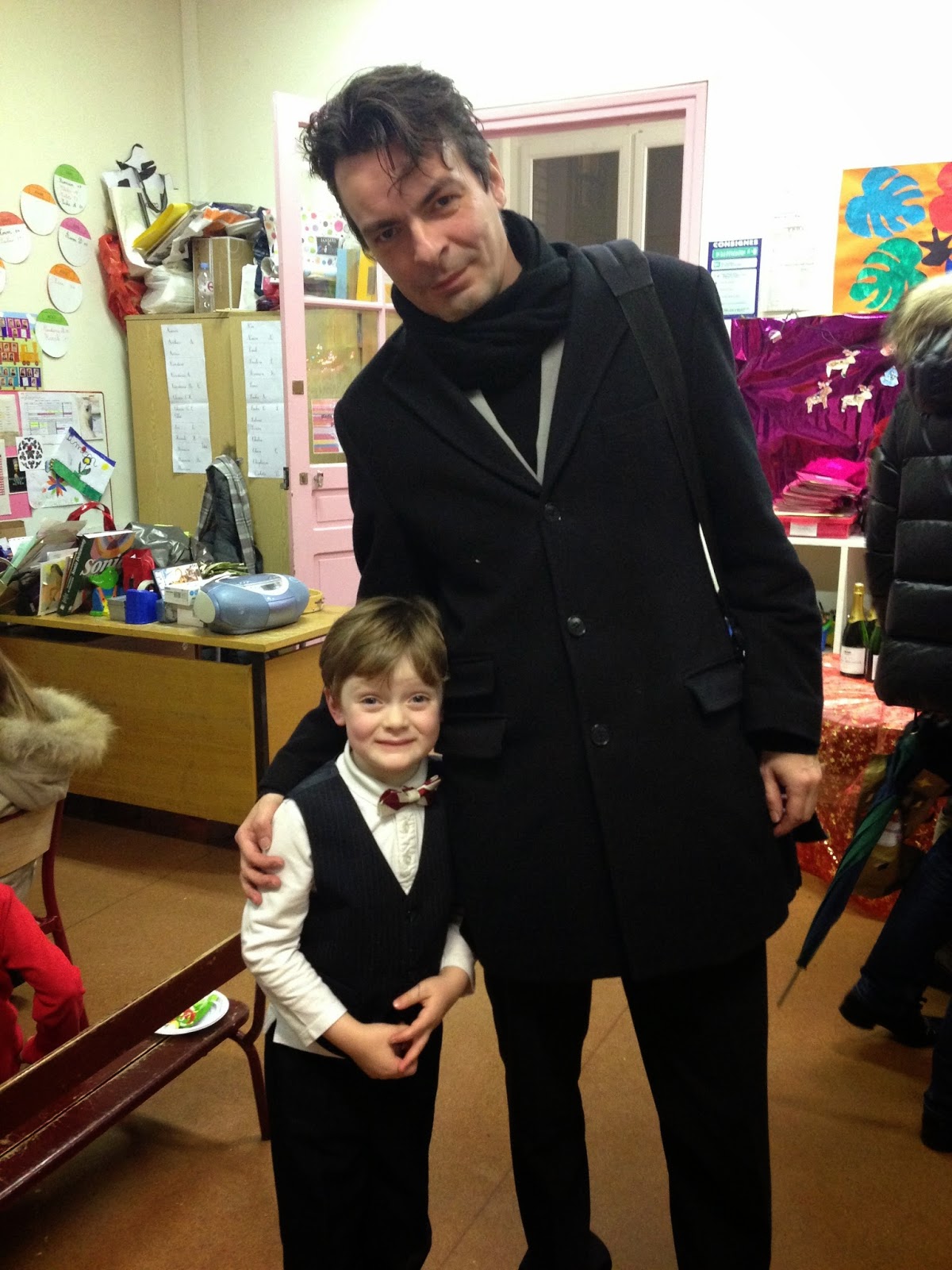 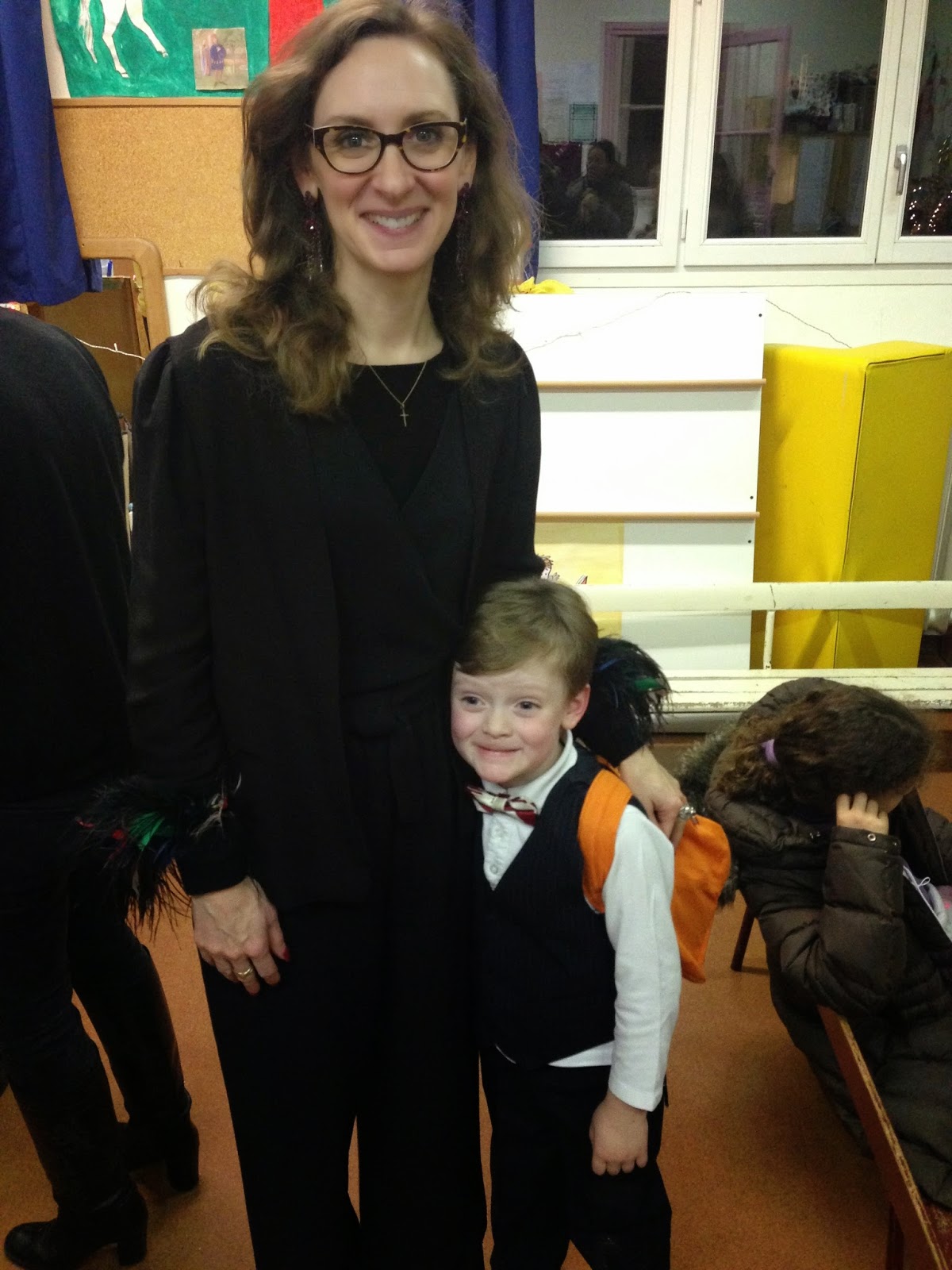 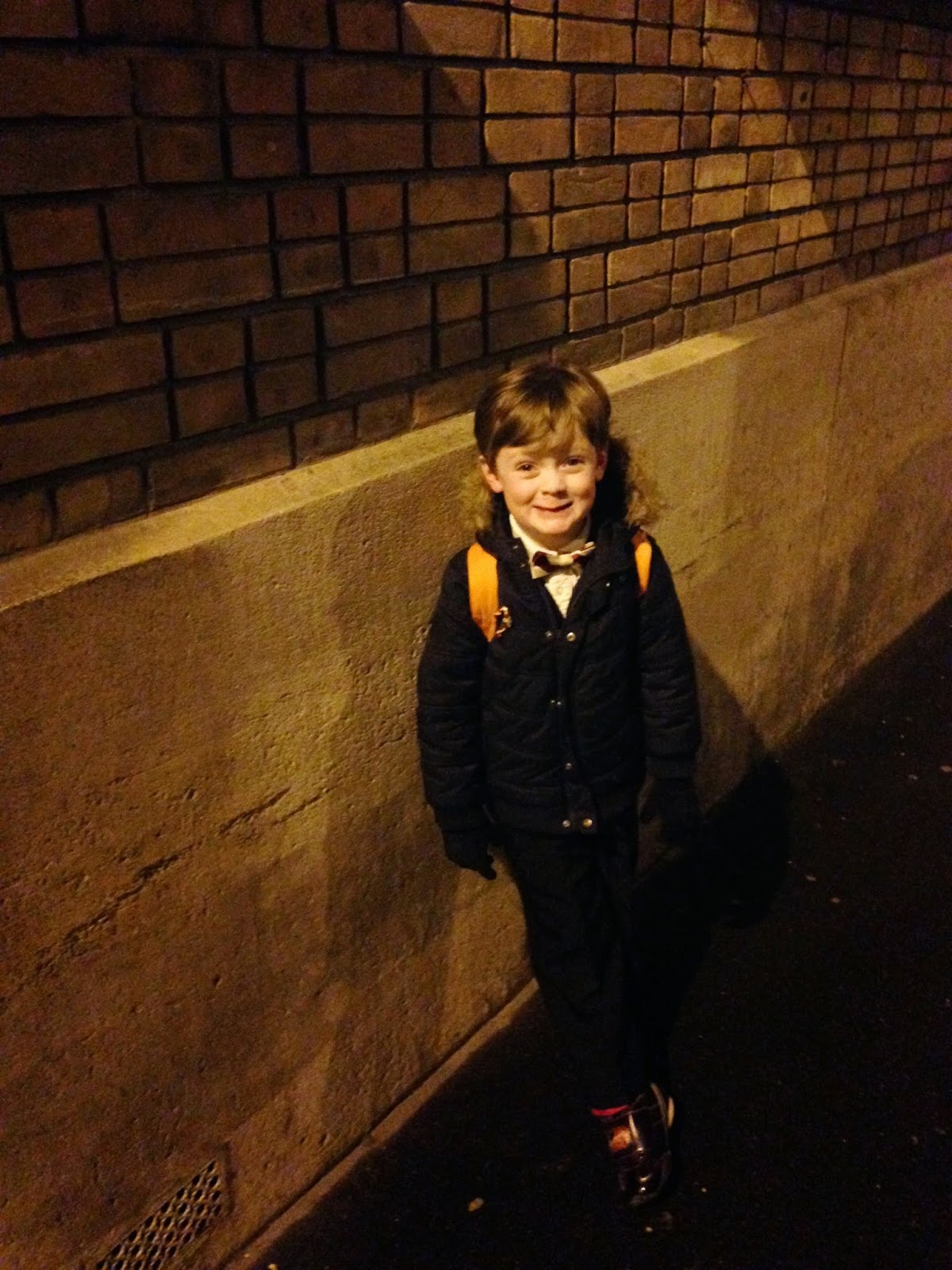 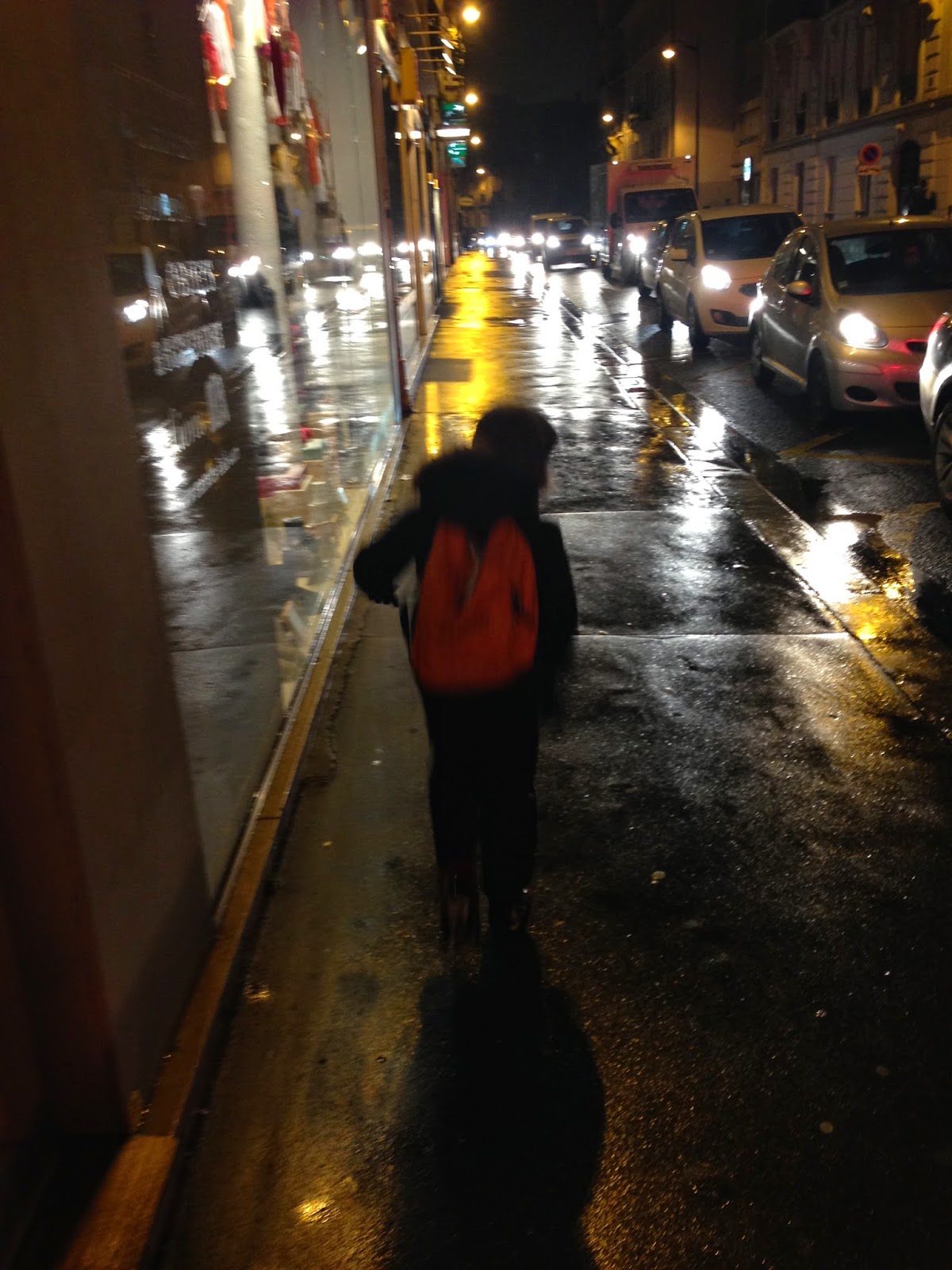