Today is a national holiday in France. It's Labor Day. And it is raining. So, since my son is home from school, I looked and found some children's films, and my son got excited about the band-annonce for Le Parfum de la carotte.
We quickly moved from lazy-day-in to ready-to-go in a short 1/2 hour. I planned our trajectory on the good ol' RATP website (Paris transport site). We walked to our corner and I scanned the QR code at the bus stop to get the next arrival. 11 minutes. Simon wanted to wait as he amused himself looking at the BDs (band-dessines/graphic novels) in a shop window and fondled pears at the fruit stand. The parents of one of his friends walked by...we chatted and they went on their way. We waited. And waited, and continued to wait. I checked the QR code again. Now 3 minutes. About 5 minutes later the bus lumbered around the corner.

I guess considering it was Labor day, the bus driver didnt want to labor too hard...He inched his way towards us. I've now waited about 20 minutes for the bus and considering we had to catch a 2nd bus (#70 at Radio France) I felt we were never going to make this movie.

We got on the bus. It lumbered forward. We got out at our stop. Eureka. A cash machine. I got some cash. I hailed a taxi but he didn't want to wait for me. We walked to our next bus stop. Saw another cab, hailed it, and it stopped. We arrived at the theater. There were about 50 families standing outside, in the rain, waiting. 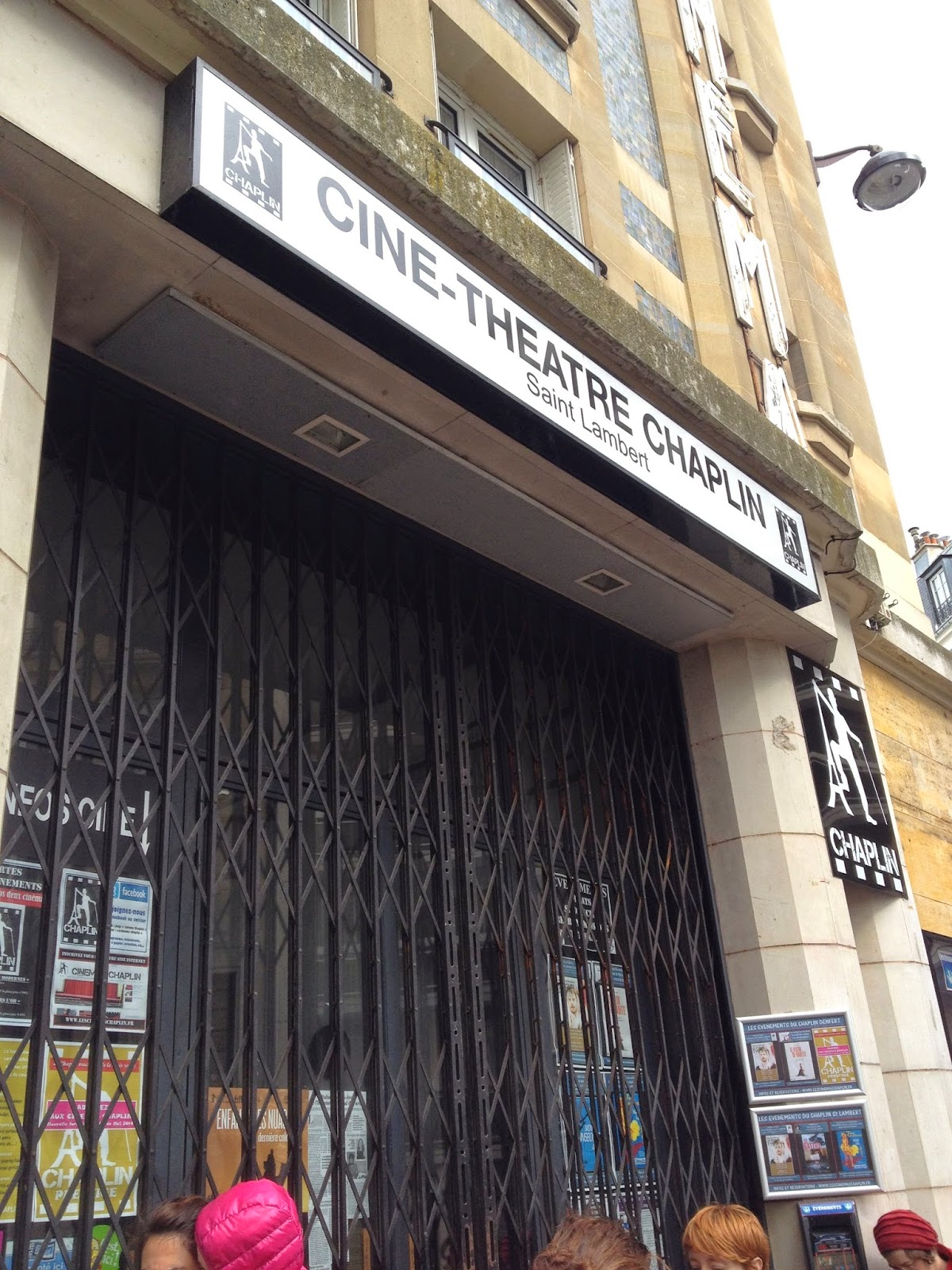 The theater was dark and still had the accordion gates closed in front, locked with a bike-lock. Parents were checking their cell phones. No one is talking to each other. No one. The few parents who are checking their phones are not sharing any information with anyone else. After about another 15 minutes  I over-hear a mother explain to another that the website of the theater shows the first film of the day to be Clochette et le fée pirate (Tinkerbell and the Pirate Fairy) at 14h30.  However, the Allocine.fr site (the major film listing site in France) lists Le Parfum de la carotte at 11h20. 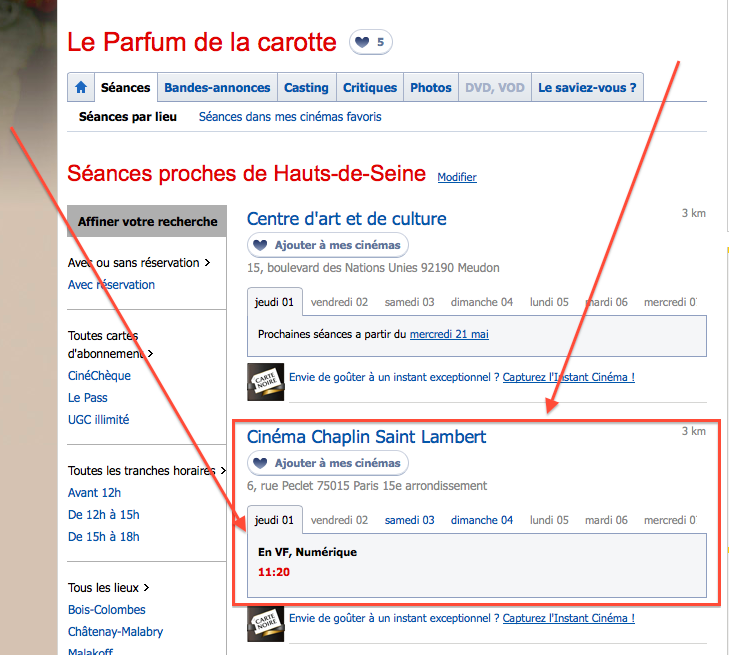 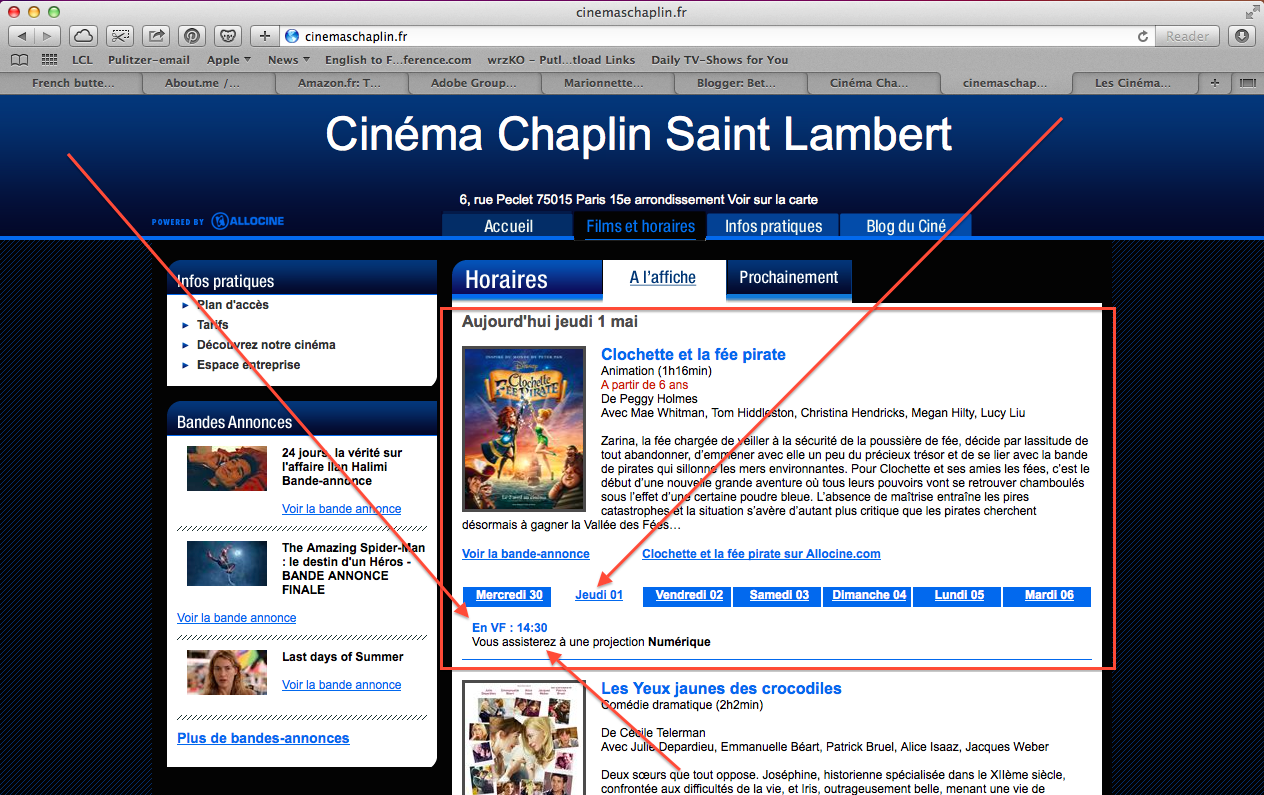 Further down the CinemasChaplin site there is a notice that they have a NEW site:

The text announcing the new site, the image of the new site and the text link of the new URL ARE NOT LINKED. If you click on the new site you get the same page but with more different colored fonts, underlined text and nearly unintelligible mishmash.

You cannot go to the new site unless you highlight the text, copy it and then paste it into a new browser tab. This is not convenient from a mobile phone that is dropping wifi/internet connectivity.

Their phone number is NO WHERE.

[I tried to call them earlier this morning, at home, to see if the theater was even going to be open considering it is a smaller "family-type" theater and not one of the major corporation theaters. I finally gave up on their site and went to PagesJaunes.com. I then had to click on a "reveal the phone number" button to finally see the phone number(s) of the theater. I called both numbers. One never answered and the other was a recording saying it is only for Administrative inquiries and School outings. No way to find out if this theater was open in the first place. Or, if I had even noticed the disparity from the two webpages to clarify what is showing when.]

More families are showing up. More parents are questioning whether the theater is going to open at all. After the one mother's announcement that the first film of the day is actually not until 14h30, they start falling away in twos and threes...

I am on the phone with my husband and he is researching all this on the internet from his office in the South. As he is doing this, a man drives up in a black "Cinema Chaplin" van. He races out and apologizes saying his child was sick and his wife...(didn't catch that part)...and he's sorry for the delay but, yes, he will still put on the film for us even at this late hour.

Yea! Our patience, and confusion, paid off!

After about another 10 minutes of this poor man running to set everything up, he unlocked the doors and ran behind the caisse to sell tickets.

We got our tickets and, with about four other families, enjoyed these delightful short animated films.